Habibi Jammin’ takes us beyond the headlines and into the lives of four young people from the Arabic community in the troubled Western Sydney suburb of Bankstown. Watch it here.

NOMISe, Julie, Susan and Matuse are the most talented and articulate participants in the Jammin’ in the Middle E drama project which promises to produce a television drama based on stories from their lives.

To be young and Arabic in Bankstown is to have lived through the last four years of negative racial stereotyping: Children Overboard, Tampa, September 11, and ‘Lebanese gang rapes’.

Habibi Jammin’ is a first-hand account of being young and Arabic from a much neglected perspective; we hear from the irrepressible, hilarious and ambitious young Arabic men and women themselves – over a two year period, we take the audience behind their front doors, into their workplaces, onto their streets and into their cars. 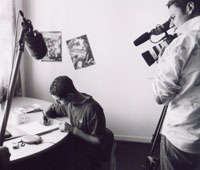 We chart the unfolding events in our characters’ lives, losing jobs, finding work, starting college, successes, failures and even marriage! It’s a timely and charming expose of a much talked about but little understood sector of the Australian community.