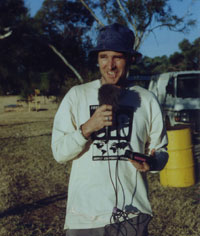 Derebe –Portrait of an Ethiopian Musician

Derebe is a peek into the life of a young Ethiopian exile as he plies his musical trade in the Sydney suburbs.

Derebe Desalegn was a young professional musician in Addis in Ethiopia when he met and Married Jackie Bond, an Australian NGO worker in 1997.

The couple returned to Australia where Derebe studied English and together, they brought up their daughter, April.

Derebe has worked in a number of jobs since coming to Australia while trying to establish his music career. He plays Masenko, a one stringed instrument played with a bow, and sings traditional Ethiopian songs, mainly at local Ethiopian community events.

This program revolves around the Easter celebration which is Derebe’s biggest gig of the year. Organising is not Derebe’s strong point – will the gig break even? Will he get a crowd? Will Derebe ever achieve his dream of stardom in Australia?

This program mirrors the problems many emigrants have in coping with a new country….. For now, Derebe faces the future with a positive vibe, a big smile and a rocking repertoire of kicking Masenko dance tunes!

Wired Palestine looks at the role of the internet in the Middle East peace process.

Oxfam and Community Aid Abroad in Jerusalem are involved in a project to wire up refugee camps in Palestine so that young Palestinians can talk to refugees in other parts of Palestine and around the world.

In Western Sydney, Enda Murray has been working with young Palestinians aged 16 to 25 for 4 months to construct a creative youth portal for young Palestinians on the world wide web. The project has thrown up some very interesting ideas about identity and how the internet will mediate identity in the future.

For so long without a nation state, how will the creation of a community in cyberspace affect a people’s sense of who they are and where they belong?

Wired Palestine explores these issues by visiting Palestinian communities in Western Sydney and in Palestine itself. The program talks to the young participants in the projects and find out what they think of the new communication tools they now have access to.

The program also speaks with political activists on both sides of the divide, and the NGO’s and media organisations behind the internet initiatives to see what informed the creation of the cyber community. What difference have these initiatives made to the search for peace? Has it brought the warring communities together? What lessons are there for other diasporic communities in using these technologies to preserve a connection with the lives they have left behind?

Mad Max meets the Merry Pranksters in the red centre of Australia – It’s a road movie on the radio!

On May 1 st , 2000, a group of 100 artists, activists and performers from 18 different countries left Port Augusta in South Australia in a motley assortment of old cars, busses and trucks ( one van was powered by used veggie oil!). On a very definite no – budget operation without funding or financial support of any kind, the Earthdream convoy set out on an epic trip northwards across the red centre in an attempt to experience first hand the issues of Aboriginal land rights and sustainable living.

Through sun, rain and riot police the Earthdreamers unloaded their sound systems from busses, trucks and veggie-oil powered vans and exposed remote Aboriginal communities to an eclectic mix of dance music and performance. In return they learned from the Aboriginal elders the problems that indigenous people face. The Earthdreamers joined with the Arabunna people to march on Beverly uranium mine and were attacked by South Australian police. Participants were beaten with batons and many, including an 11 year-old girl, were sprayed with capsicum spray. 27 arrests were made.