Virtual Palestine was a cutting-edge arts project, developed in 2002 by Virus Media in collaboration with young Palestinians in Sydney to establish a creative cyber presence for the global Palestinian diaspora. The site used both English and Arabic and featured a gallery, a communication space and music software to jam live on the net with people in other countries. Virtual Palestine’s content was based around artistic explorations of Palestinian culture, examining individual experiences of identity, culture and place.

This was reflected in the different creative zones of the website – a gallery; a personal profile where people told their own stories; a map locator for Palestinians to relate, where they live now to where their family originally lived in Palestine; and a music creation area. A news and current affairs area was linked to the Indymedia Global independent news network.

Stereotypes were challenged, with the opportunity to ‘throw your own rock’ into orbit in the stone thrower area. Here people could stuff their frustrations into a ball and send it into cyberspace. This played upon media images of stone-throwers in the Palestinian Intifada. Reflecting the aims of Virtual Palestine, it transformed a negative image into something positive. 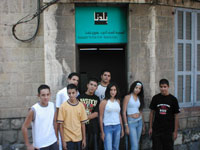 Unfortunately the server for Virtual Palestine is now defunct and the site no longer exists.